Driving off a cliff 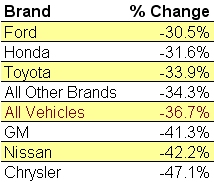 U.S. auto sales drove off of a cliff in November.

The numbers from Autodata show that the industry as a whole is down almost 37% from last November, and GM and Chrysler are especially hurting, with sales down 41% and 47%, respectively.  Toyota fared better than the industry average, but still lost a third of its sales from last year.

Industry sales have been down all year, but the November numbers were especially shocking.

sales.  Combined, the Detroit automakers derive two-thirds of their sales from light trucks.  Chrysler sells three times as many trucks as it does cars.

Toyota, Honda, and Nissan get most of their sales from cars.  In fact, I was surprised to see that the "Japan 3" sell more cars in the U.S. than the Detroit 3.  Toyota has the largest share (21%) of cars in the U.S. market.

So when gas prices topped $4 per gallon earlier this year, the sales of gas-guzzling trucks fell off dramatically.  Because of their dependence on trucks, Detroit suffered far more than the Japanese and European automakers.

Essentially, customers shifted their purchase patterns to cars when gasoline prices became a burden, and that helped Japan at the expense of Detroit.

So what is going on?

November is different because customers stopped buying vehicles, regardless of whether they were a truck or a car.

All of this has amounted to a fatal one-two punch for Detroit.  Wobbled by disappearing truck sales when gas prices were high, the knockout punch for the Big 3 came when the overall market dried up.  While the economic downturn has hit all of the automakers, Detroit has crumpled under the weight of its legacy burdens.

As the Big 3 executives go back to Washington (this time driving hybrids instead of riding in company jets) to ask for emergency funds, I'm still wondering: What will change?