We really appreciate when customers go out of their way to talk about Lowell's, either in person or online.  Thanks, Erik.

A few years ago, Chili's really ticked me off.

Because of our careers, my wife and I ate out a lot.  (We still do.)  And Chili's had my favorite meal, a dish they called 'Margarita Grilled Tuna'.  I had eaten it every week or so for some 5 or 6 years.

Then it disappeared from the menu.  (Editorial comment: Booooooo!)

I tried to stay away from Chili's in protest, but my wife dragged me back in.  Eventually, I found some other things I liked eating there, but nothing ever compared to that tuna…

Chili's continued to be part of our regular rotation of restaurants after our son was born.  And, with his magnetic personality, several wait-staff members would go out of their way to come visit with him.  The greeters and managers began recognizing us as well.

When we walked in last night, the greeter proclaimed "There's my buddy! How's Mr. Carson tonight?" and exchanged high-fives with him.  She took us to our 'regular' booth (in reality, we have eaten all over the restaurant, but we do prefer the booths).

Alex, who wasn't our server last night, came over and double-high-fived Carson, and talked with him for a few minutes.

Neil, the general manager, came over and gave him a big hug and called him by name.  He also brought a Chili's ball cap, and gave it to Carson to wear.  On previous visits, Neil has also brought us a complementary slushie and has introduced Carson to Neil's own daughter. 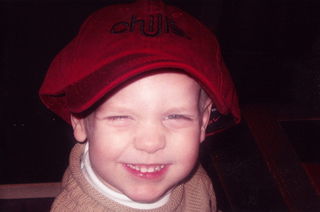 Last night, he asked if he could take Carson's picture for the office wall, because "seeing Carson only once a week just wasn't enough".  15 minutes later, he brought out a 4×6 print for us to keep.  Carson was beaming.  (My scan doesn't do the original photo justice.)

On the way out, Carson gave Neil another big hug and waved goodbye enthusiastically to the other staff members.

Eating out with a toddler can be a challenging experience.  At Chili's, the staff's willingness to engage Carson has helped keep him occupied and entertained.  That's a big bonus for parents like us.

But what makes the experience truly special is the sense that we are among family and friends.  Carson is greeted with genuine joy by the Chili's staff.  They are happy to have us come back.  And, as a result, we are happy to go back.

For Carson, these kinds of interactions have made Chili's one of only two restaurants he knows by name: "Chih-wee's".  (The other is "Chick-foo-way".)

Can I recommend every Chili's based on our experiences?  No.  Over at the Brand Autopsy blog, John Moore openly wondered why Chili's needs to exist.

But I can heartily recommend our Chili's.  Even without the tuna…

A Few Lessons for Business

I like Dockers pants.  They are easy to find, and their sizes are reliable and fit me well.  I'm a particular fan of their "Golf Pant" – not because I play golf, but because they have a few bonuses I like: a 'shirt-gripper' waistband (to keep shirts tucked in) and extra interior pockets (to keep my stuff easy-to-find).  Also, I don't have to iron them — a big time-saver.

So I visited a store earlier this week to look for them.  But the Dockers section had a lot of new, unfamiliar names for their pants: 'The Broker Chino' and 'The Lincoln Pant'.  The Golf Pant was nowhere to be found…

I was in a hurry, so I grabbed the ones which looked closest to the style I liked: The Lincoln Pant.  Same price, same style.  Just a different name…

Or so I thought.

The next morning, I put these pants on, and noticed to my annoyance that the shirt-gripper was missing.  My brain was filled with images of me constantly stuffing my shirts back into the back of my pants.

Then I went to load my stuff: change, cell phone, pens, glasses case, cash, and such.  No interior pockets, so all my stuff was swimming in there together.  Plus, the pockets aren't as deep as they used to be.  Another annoyance, especially when I'm driving or sitting and stuff spills out of my pockets.

It seems that the Lincoln pants are a recession version of the Golf pants: All style, no substance.  By skimping on a few square inches of cloth and that little rubbery strip around the waist, the pants have lost most of what made them worth buying in the first place.

Lessons for Business
Times are tough for a lot of businesses, and the desire for cost-cutting is understandable.

But when a business chooses to scrimp on the very things their customers value, they make things even tougher for themselves.  Ultimately, such businesses wither as customers see no particular reason to patronize them.

Did Dockers offend me?  No.  I bought a decent (but not special) pair of pants.  But by charging the same price for a blander product, they did create a Zero experience and gave me the impression that they just stopped trying to meet my needs.

So, by saving costs on these "recession pants", Dockers will likely lose a customer.  That's a steep price for the few pennies saved.

It might have cost them a little more in these hard times, but it would have increased my devotion to their brand, perhaps for several years.

What is that worth?

The meal was fine.

But I left my glasses at the table.

When we sat down, I distinctly remembered setting them near the edge of the table.  As the meal progressed, and we attended to our 2-year-old, they got obscured by plates and napkins.

As we were leaving the table, we saw some long-time friends at another table.  My wife took our son over to visit while I paid the bill (nice tip – more than 25% because we had a coupon) and gathered our things.  But I forgot my glasses.

We visited with our friends for about 5 minutes on the other side of the restaurant and went out to the car.  That's when I realized that I didn't have them.

I returned to the table, which had already been cleared.

That's when it got ugly.

I found our server, and when I asked her about the glasses, she declared that they weren't on the table: "I would have seen them if they were there."  She was quite defiant, and I started to regret that I had been generous with her tip.

I told her I was certain I left them on the table, and I wondered whether they could have been placed into the trash.  Now, she looked at me with disgust.  She reiterated that she would have seen the glasses "if they were there."  When she saw I was serious and wasn't going to leave, she offered to talk to the manager about whether I could go through the trash.

While she was in the kitchen, I heard her declare that she wasn't going "in there" (the trash can).  There were also rounds of laughter — I assumed it was at my expense.  She came back, and informed me they would carry the can out to the back of the restaurant, and I could rifle through it out in the cold.  She looked at me as though I had bugs crawling all over me.  Now furious, I told her I'd go out there.

I pulled my car around back, and two kitchen dudes brought a couple of garbage cans out.  Without saying a word to me, they plopped them down, returned to the kitchen, and slammed the door.  I stood there in the cold, stunned for a few seconds as I realized that no one was going to help in the slightest — even to offer any suggestions on where to start or implements with which to sift through the trash…

Then, I remembered that I had a 24" level in the back of my car.  At first, I poked and prodded through the kitchen waste with the bright yellow level.  No glasses.  Then I was rowing through the stuff to get deeper and deeper into the can.  My son was repeating "What is Daddy doooooing?" over and over again.  It must have made for a comical scene, but I was livid.

I was angry enough that I entertained the thought of emptying the trash cans all over the lot.  Or, even better, the lobby!  I just wanted revenge.

Then, I rowed back a piece of lettuce and found my "prize": The glasses were covered in some sort of ranch sauce, onion, and ketchup concoction.  I went back to the car to get a few paper napkins, and then fished the disgusting mixture out.

I wanted to show our server — despite her absolute certainty that the glasses weren't there — that in fact, they were.  So I headed around to the lobby.  One of the kitchen dudes was outside the front door on his smoke break.  "Did you find 'em?"  "Yes," I said, holding up the messy prize.  "Really?  That's amazing…"  I asked him to let our server know, deciding not to make a bigger confrontation out of it.

While I had gone to the front, the manager had come out briefly to talk with my wife.  He went inside before I got back.

But for me, it was too little, too late.  I hated Ruby Tuesday.  That was two weeks ago, and I'm still peeved.  Can you tell?

A Few Lessons for Business

Here at Lowell's, we strive for an exceptional level of customer service.  We want our customers to remember and recommend us.  When they do, we grow.

In reality, we make mistakes.  But we do try to learn and improve when we make them.  And we try to make up for mistakes whenever possible.

Recently, we have had some, er, memorable customer experiences with other organizations.  In upcoming posts, I'll document some of them.  It will be quite entertaining.

In the process, I'll use three categories to talk about customer service levels:

We're going to have some fun with these posts, but we're also going to try to extract important business lessons from them.