Why has Lexmark’s stock price jumped?

Since we chronicled the implosion of Lexmark on June 25th, Lexmark's stock has seen a remarkable run-up in its stock price.  In less than 4 weeks, the stock has moved up over 22%: from just over $15 a share to $18.61 at Friday's close.

So does the run-up prove we were wrong on our assessment of the failures of Lexmark executives?

While a 20% increase in a single month seems impressive, Lexmark needs to turn in a 1000% increase to overcome the failures of the past 5 years.  And even after the gains of the past month, Lexmark's market value is still down almost 90% from where it was five years ago.

But such an aggressive jump in price still begs the question: Why has Lexmark's stock price jumped?  The question is especially interesting given that there has been no significant news coming from the company.

There are three plausible explanations for such a run-up in stock price:

So which of these explanations is most likely?  A chart of Lexmark's stock price (below, from Google Finance) shows that almost all of the recent increase came in July, with a conspicuous jump in price on July 1st.  July volumes have also been nearly 50% higher than average.  The July 1st pop in price was the first significant move up after drifting downward throughout June. 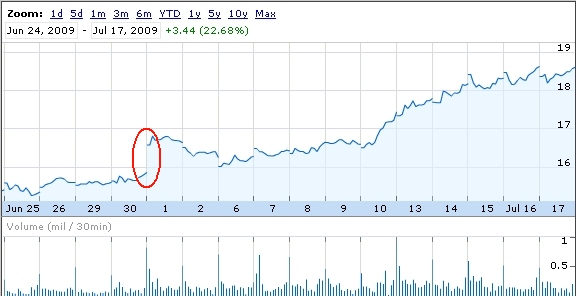 Why would the price jump on that date, and continue to increase through July?

The timing and volume of the surge in Lexmark's stock price make us suspect that Lexmark's management has been buying back even more of the company's stock – the "window dressing" explanation above.  By buying back stock beginning July 1st, they could improve stock price while not having to report buybacks until September (and not having to include those purchases in Tuesday's report).  If management is buying back a lot of stock, that could also account for the increase in options calls as traders try to feed off of the temporary boost in stock price.

The recent run-up in stock price is probably not due to improved business fundamentals at Lexmark.  All outward signs show that those fundamentals are deteriorating.  Instead, our bet is that Lexmark's stock price has risen because of share buybacks, a traditional crutch for Lexmark's management.

And, historically, buybacks have been a failed long-term strategy for Lexmark.

Update 7/21/2009: After Lexmark's earnings announcement this morning, Lexmark stock has given up all of the gains from the past month.  If Lexmark's management did buy back stock early in July, it would fit the long-term pattern of failed buybacks.