Your mechanic on Mechanic Street

Lowell’s is Lexington’s only mechanic on Mechanic Street. 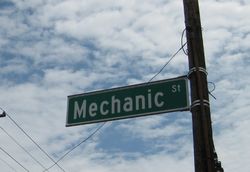 Many of you know that Lowell’s has been serving Lexington for more than 30 years from the same location at 111 Mechanic Street. We love being your mechanic on Mechanic!

While we like to joke that the street was named for Lowell’s, we’ve long been curious about where the name came from.  “Mechanic” seems like a pretty new term, and we wondered if the street was relatively new or if the name had been changed from something else.

So we were surprised to learn that it has been called Mechanic Street for nearly 200 years!

Today, “mechanic” is commonly used to refer to someone who works on machinery.  Back then, it had a somewhat different usage: “mechanic” referred to a variety of skilled tradesmen.  Essentially, “mechanic” was used in the same sense that we use “artisan” today.

Records from an 1818 directory of Lexington show an Elisha Babcock as Mechanic Street’s only resident. In that directory, Babcock was listed as a “carriage maker”.

If you’re curious about the data, Richard E. Stevens of the University of Delaware compiled historical datasets from many U.S. cities.  I found Elisha Babcock in the 1818 Lexington Directory (Excel file) and 1818 tax rolls (DBF file – can be opened with Excel).  I also found RootsWeb’s Fayette County resources and maps to be useful in my research.  Access Geneology lists many other Kentucky directories, as well.