Toyota is the top brand in Lexington

On Thursday, Lowell's will release the Bluegrass Vehicle Report, which will look at the kinds of cars central Kentuckians drive.

One surprise finding:  Toyota is now the top brand (or "make") of vehicle on the road in Lexington, surpassing both Ford and Chevrolet.  Obviously, as Toyota specialists we're pleased.

We'll have all of the details in the Report later this week.

In January, the Wall Street Journal ran a page one story about the troubles facing two dealerships in southeastern Kentucky.  One of them, Johnny Watkins, had filed for bankruptcy.

At the time, we predicted that there would be a lot more dealership closures in 2009, especially in smaller towns. 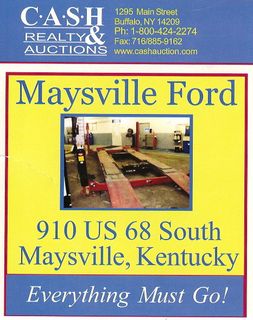 Then, a couple of weeks ago, we received an auction notice to liquidate the assets of Maysville Ford.

Why is this happening to dealers in small towns?  There are a few key reasons:

The economic realities of being a dealer in a small town mean that a lot of them won't survive over the next couple of years.